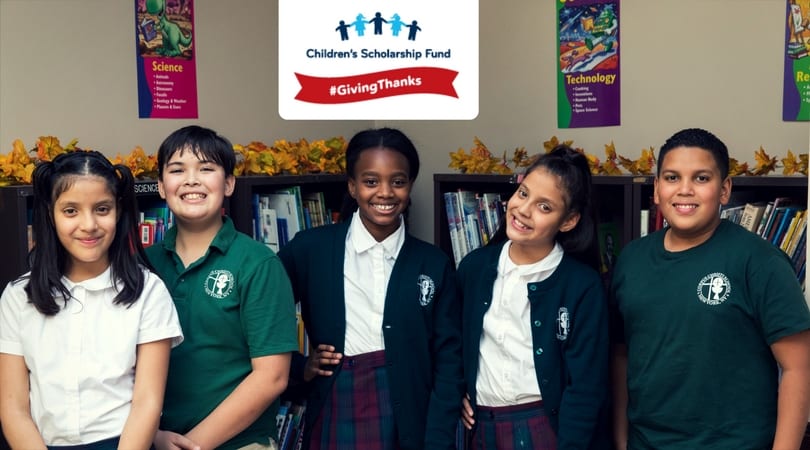 This Thanksgiving season, as we approach the 20-year anniversary of CSF’s founding, there is a lot to reflect upon and be grateful for. When John Walton and Ted Forstmann co-founded CSF back in 1998, they could not have imagined that 166,000 children would benefit from CSF scholarships over the next two decades! Those children’s life trajectories have been forever changed for the better because their families were empowered to choose better schools for them, and we are grateful for everyone who made that possible.

To mark the milestones of 20 years and 166,000 CSF Scholars, today we begin our #GivingThanks celebration, during which we will share messages of gratitude from the entire CSF family and network, which includes:

• Thousands of CSF supporters who make CSF scholarships possible year after year;
• 26 CSF partner programs in 19 states across the country;
• More than 140,000 CSF alumni in high school, college, and beyond, many of whom are now paying it forward and helping current CSF Scholars;
• Thousands of CSF parents and family members who partner with CSF and sacrifice to contribute part of their children’s tuition,
• And finally, more than 25,700 current CSF Scholars, including almost 8,000 children who received brand new scholarships this year!

Over the next few weeks, watch out for special #GivingThanks messages on Facebook and Twitter as CSF supporters, partners, alumni, parents, and even current CSF Scholars share their gratitude! And please join in the fun and tell us what you are #GivingThanks for this year!